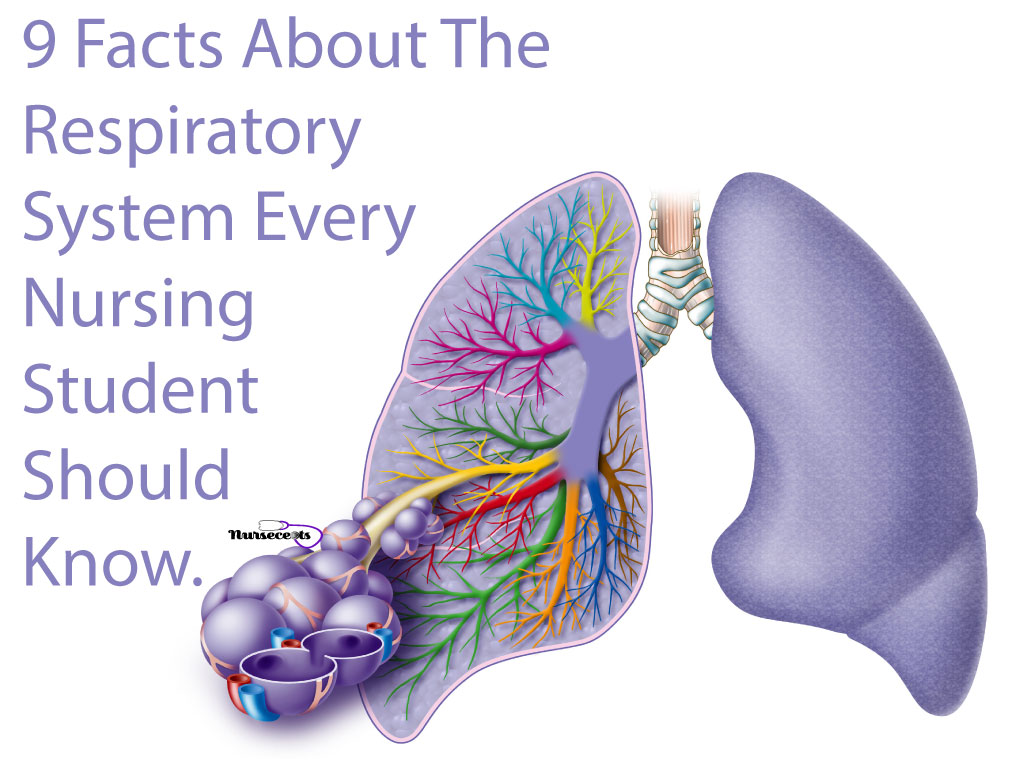 The respiratory system brings air from the atmosphere into the lungs. The bloodstream carries air from the lung to the body’s tissue.

The cells of the body use oxygen and produce a waste byproduct called carbon dioxide. Carbon dioxide is toxic and can cause problems if allowed to remain in the body.

The bloodstream removes this waste product and sends it back to the lungs. The respiratory system also helps maintain acid-base balance and is responsible for the creation of speech.

The exchange of oxygen and carbon dioxide is important for maintaining the processes of the body. There are a few things about the respiratory system that a nursing student should understand.

The first thing a nursing student should understand about the respiratory system is the anatomy. A quick review of the anatomy is always a good first step in order to become familiar with the system you are studying.

Second, an understanding of ventilation, diffusion, and perfusion will help your comprehension of what happens when a patient has a respiratory problem.

A review of respiratory anatomy and the concepts of ventilation, diffusion, and perfusion are covered in this article that contains 9 Facts About the Respiratory System Every Nursing Student Should Know.

The nasal cavity also produces mucus which traps particles and pathogens. The cilia (hair-like projections) move the trapped substances for expulsion or to be swallowed.

The pharynx is very important because it is the only passage from the mouth and the nasal cavities to the lung. So, if there is an obstruction in the pharynx, no air will get to the lungs. The adenoids and tonsils are masses of lymphatic tissue which are located along the respiratory tract.

This keeps food and fluid from entering the lungs. However, when disease or other conditions cause the epiglottis to function improperly a person can aspirate. Therefore, the epiglottis is a line of defenses for the lungs.

The trachea extends from the cricoid cartilages to about midway of the chest around the 5th or 6th thoracic vertebrae. The windpipe is another name for the trachea.

The structure of the trachea contains c-shaped or horseshoe-shaped cartilage that protects the trachea. These c-shaped rings or cartilage open to the back where the esophagus lies. This opening allows for large food boluses to pass down the esophagus.

The smallest branch of this tracheobronchial tree is the bronchioles and terminal bronchioles. The bronchioles are about 1-5 mm and have no cartilage rings. Consequently, there is no gas exchange to this point.

The bronchioles terminate into the alveoli. The alveoli resemble clusters of grapes. The alveoli are the functional unit of the lungs.

The lungs are a cone-shaped organ. They are located inside the chest cavity. The right lung has three lobes. The left lung has two lobes.

The lungs are elastic and capable of stretching in all directions and recoiling back to their normal sizes.

Fact #2 – Ventilation is a Component of the Respiratory Process

Respiration is the delivery of oxygen to the body and the elimination of carbon dioxide from the body. The respiratory center in the medulla oblongata controls respiration.

When the lungs are at rest the air in the trachea and alveoli are equal to the atmospheric pressure or the pressure in the environment. Breathing begins by creating a negative pressure within the chest.

Fact #3 – The Movement of the Chest Cavity is Due to the Respiratory Muscles.

First, the lower ribs move up and out to the side. Second, the upper ribs rise. Third, the bottom of the sternum moves forward causing it to tilt. This movement increases the expanse of the ribcage. The volume of the ribcage increases.

Therefore, this increase allows for the lungs underneath to draw in air. The term for this process is called inspiration. Upon expiration, the intercostal muscles relax the ribcage falls due to gravity.

The act of breathing uses other muscles in the thoracic area. This especially happens when a person has a respiratory complication or respiratory disease. In these instances, the patient must work harder to draw in air.

Fact #4 – The Lungs Need to be Compliant

Lung compliance is the ease at which the lungs can inflate. The elasticity of the lungs allows for them to expand and recoil. If the lungs are less compliant they are harder to inflate.

Compliance is very sensitive to any adverse condition of the lungs that may affect the tissue. A decrease in surfactant will cause a decreased in compliance.

The parietal and visceral layers are able to slide across each other due to this liquid. However, when the two pleural layers are together they adhere and make the two moist layers very difficult to pull apart.

That is why the lungs increase and decrease in volume as the thoracic cavity increases and decreases in size.

Fact #6 – Diffusion is Another Component of the Respiratory Process.

As previously mentioned, respiration is the delivery of oxygen to the body and the elimination of carbon dioxide from the body. Diffusion is the movement from an area of higher pressure to an area of lower pressure.

Equally important, respiration uses diffusion as a mechanism for the exchange of oxygen and carbon dioxide. Diffusion as part of the respiratory process is the movement of gases back and forth across the alveolar-capillary membrane.

When we talk about the air we breathed in or the air in the atmosphere, we are not talking about 100% oxygen. More than one gas makes up the air we breathe. Below are the components of atmospheric air. There are some additional trace components that are not necessary to mention in this article. https://www.space.com/17683-earth-atmosphere.html.

Remember, the numbers above are for the atmospheric air or the air we breath in. The air entering the lungs and alveoli has a higher pressure of oxygen than the oxygen in the blood of the pulmonary capillaries.

As mentioned earlier, diffusion is the process of moving from an area of higher pressure to an area of lower pressure across a pressure gradient.

The partial pressure of oxygen in the:

The partial pressure of carbon dioxide in the:

This pressure in the alveoli and the pulmonary capillary help decide which direction the gases will go. This direction is based on the principle of diffusion.

Remember, diffusion is the movement from higher pressure to lower pressure. Therefore, in order for diffusion to take place the partial pressures in the alveoli, pulmonary capillaries, arterial capillary, venous capillary, and tissues are all different.

Remember that diffusion is the movement from a higher pressure to a lower pressure in order to equalize.

Hemoglobin is the component in the blood which carries oxygen. Hemoglobin has an affinity to oxygen. This means there is an attraction between hemoglobin and oxygen.

When the hemoglobin picks up the oxygen from the alveoli capillaries, the oxygen loosely binds to hemoglobin so it can be released to the tissues.

Sometimes, in the lungs, oxygen is easily pick up but not easily delivered to the tissue. On the oxyhemoglobin dissociation curve, this is called a shift to the left.

Other times in the lung, oxygen is not easily picked up but more readily offloaded in the tissue. This is called a shift to the right on the oxyhemoglobin dissociation curve. The body can adapt to small shifts, but large shifts can be life-threatening.

Fact #9 – Ventilation and Perfusion Must Have a Good Relationship.

Therefore, the exchange of gases across the alveoli-capillary membrane depends on the ventilation of the alveoli and the perfusion of the pulmonary capillaries.

The movement of oxygen and carbon dioxide in and out of the alveoli is dependent upon adequate ventilation and perfusion.

Therefore, there must be adequate diffusion of oxygen and carbon dioxide across the alveolar-capillary membrane.

hen perfusion is poor, that means there is not enough blood (or hemoglobin) to pick up the oxygen. Therefore, the amount of oxygen carried to the body and tissues is inadequate.

Therefore, a certain percentage of blood will return from the lungs to the left side of the heart deoxygenated. The term for this is pulmonary shunting. This blood travels from the heart to the body but has a lower percentage of oxygen distribution.

In conclusion, this is a list of 9 facts about the respiratory system that gives a little more understanding of the respiratory processes. This article attempted to simplify some facts that will help as you cover respiratory disease processes. Having a firm grasp on ventilation, diffusion and perfusion will assist you in caring for patients with respiratory conditions.

Medical Terminology of the Respiratory System