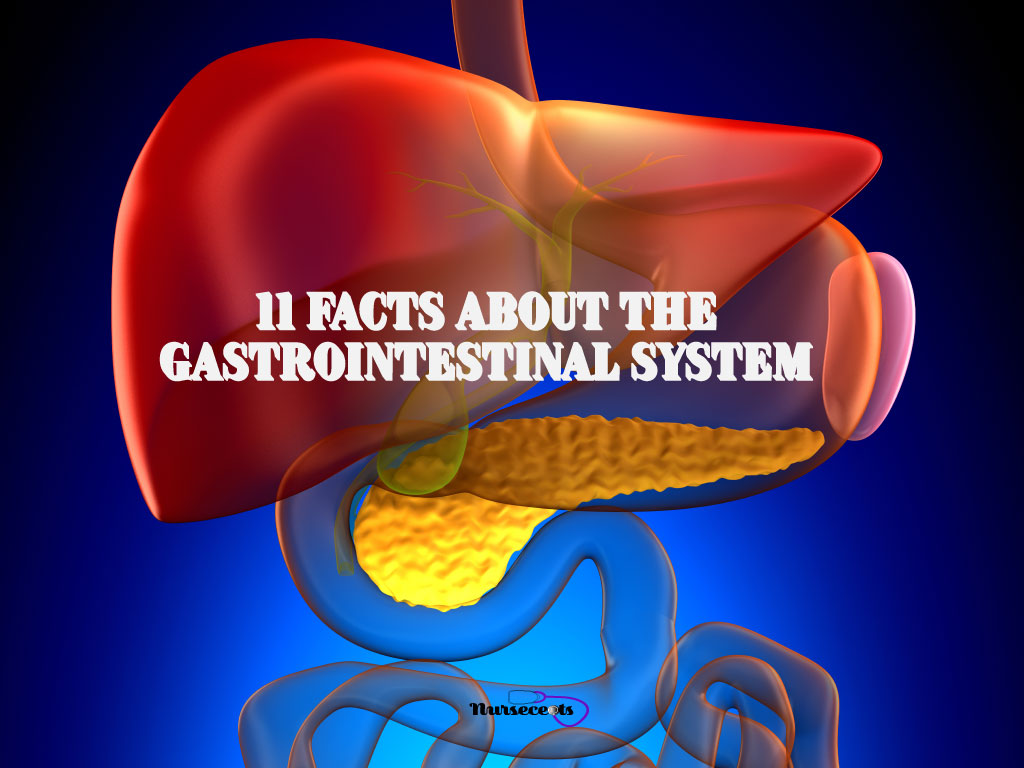 The journey through the gastrointestinal tracts begins with ingestion.

Ingestion is when food enters the mouth. The process of digestion begins with mastication.

Mastication is the mechanical aspect of digestion and involves the chewing of the food.

Digestion is the breakdown of large food particles into smaller molecules.

Secretion is the process in which acids, buffers, and enzymes are used to further break down food particles.

The next step is absorption. Absorption is the movement of the nutrient from the digested food into the bloodstream.

Finally, the journey ends with excretion. Excretion is the elimination of any material unused by the body.

Fact #1: Digestion Begins in the Mouth.

Digestion happens as food is moved through the gastrointestinal tract. It prepares food for absorption into the cells of the body. Digestion begins in the mouth where food is broken down into smaller pieces and mixed with saliva.

Saliva is a mixture of mucus, water and Ptyalin, a salivary amylase. Ptyalin begins the digestion of starches. Thereby, the mucus and water help lubricate the food to assist in the swallowing.

The act of swallowing is voluntary and controlled by the cerebral cortex and the medulla oblongata. When a person swallows the epiglottis covers the tracheal opening to keep the person from aspirating. After the food is swallowed it travels down the esophagus.

The esophagus transports food from the mouth to the pharynx. It is a hollow tube that is normally collapsed until a food bolus is swallowed.

When food moves from the mouth, it moves through the pharyngoesophageal sphincter which relaxes so food can enter.

The smooth muscle of the esophageal lining contracts and propels the food toward the stomach. Esophageal peristalsis is the process of propelling the food downward through the esophagus.

The food moves from the esophagus through the lower esophageal sphincter into the stomach. Mucus is excreted by the walls of the esophagus so the food can move down easier.

When the food enters the stomach the lower esophageal sphincter closes to prevent the reflux of the stomach contents back into the esophagus.

Fact #2: The Stomach is a Major Site of Digestion.

The stomach is a muscular bag that expands, lined with mucous membranes. It is located on the left side of the abdominal cavity.

The stomach can expand because of the folds in the stomach lining called rugae. The functions of the stomach are:

The Parts of the Stomach

The stomach begins at the bottom of the esophagus and ends at the opening of the small intestine. It has four parts and two curvatures.

So, the stomach receives swallowed food from the esophagus. Then it secretes a highly acidic fluid from its glands. This acid is called hydrochloric acid (HCl).

One function of hydrochloric acid is to assist in the breakdown of food into components that can be easily absorbed.

The second function of hydrochloric acid is to assist in the destruction of bacteria that is swallowed. Pepsin is an important enzyme secreted by the gastric mucosa for protein digestion.

Peristaltic contractions continue in the stomach to propel the stomach contents toward the pylorus. To enter the small intestine the digested food must pass through the pyloric sphincter.

Large food particles that cannot pass through the pyloric sphincter are turned back to continue to be broken down. At this point, the partially digested food mixed with the gastric secretions is called chyme. The chyme continues the process by moving into the small intestine.

Fact #3: The Major Function of the Small Intestine is Absorption.

The duodenum is the first branch of the small intestine and the shortest. The digestive process continues in the duodenum.

Secretions from the pancreas have a high alkaline property that assists in neutralizing the acid that enters the duodenum. The enzymes secreted by the pancreas are trypsin, amylase, and lipase.

Bile is secreted by the liver and stored in the gallbladder. Villi are the small finger-like projections that secrete digestive enzymes and absorb nutrients in the small intestine.

Amino acids, fatty acids, ions, simple sugars, vitamins, and water are absorbed into the bloodstream from the small intestine.

Peristalsis and segmentation continue in the small intestine propelling the contents of the stomach into the colon.

Segmentation is the back and forth mixing of chyme and digestive juices. Peristalsis is the muscular contractions that propel chyme.

The jejunum and ileum make up the largest portion of the small intestine.

The ileum is the terminal end of the small intestine. It is connected to the large intestine via the ileocecal valve.

Fact #4: The Large Intestine is Responsible for Water and Electrolyte Reabsorption.

Waste products left after absorption are moved to the terminal ileum and slowly move into the colon via the ileocecal valve.

The colon is divided into the ascending, transverse, descending and sigmoid colon.

The cecum receives food that has not been digested by the ileum. The appendix is attached to the cecum.

The colon has two types of secretions. The first secretion is an electrolyte secretion. This is a bicarbonate solution that neutralizes the bacteria action in the colon.

Passage through the colon is very slow. This allows for the reabsorption of water and electrolytes. This is the major function of the large intestine. The waste material eventually reaches the rectum.

Fact # 5: Defecation is Under Voluntary and Involuntary Control.

Fact #6: The Abdomen is the Largest Cavity in the Body.

The abdomen contains the digestive organs. These organs are the stomach, liver, gallbladder, pancreas, and intestine. Additional organs that are located in the abdominal cavity include the spleen and kidneys.

Fact #7: The abdomen is divided into nine regions and four quadrants.

You can narrow the cause of a problem by knowing the organs present in a specific region. The regions of the abdomen are divided by two horizontal planes and two vertical planes.

The horizontal planes are the subcostal and transtubercular.

Mapping the four quadrants is a good technique used for assessing bowel sound. This method of mapping uses imaginary lines just like the nine regions method.

The quadrants are divided by one horizontal plane and one vertical plane.

The horizontal plane is the transumbilical. This plane crosses through the umbilicus. And, the vertical plane is the medial plane. It extends from the xiphoid process to the symphysis pubis. The four quadrants are:

The hormones active in digestion include gastrin, secretin, and cholecystokinin.

Gastrin is produced in the stomach when the stomach becomes distended. It is secreted by the gastric glands. Gastrin stimulates the increased secretion of gastric juices. This hormone causes increased motility of gastric content, thereby increasing the emptying of the stomach.

Digestive enzymes break down starch, protein, and fat as part of the digestive process.

Enzymes that break down starch.

Enzymes that break down proteins

Enzymes that break down fat.

Fact # 9: The Liver is responsible for fats, carbohydrate and protein metabolism.

The liver is located below the diaphragm in the upper right quadrant of the abdomen. It is one of the largest organs in the abdominal cavity. The liver is divided into two parts, the right and left lobe. And, it also has two smaller lobes underneath called the caudate and quadrate.

The functional unit of the liver is the lobule. The liver receives a large blood supply every minute. The hepatic portal vein collects blood from the digestive tract and carries it to the liver for processing.

The hepatic artery supplies the liver with oxygen-rich blood. The liver is not just a digestive accessory organ. The liver has many functions in the body. It controls numerous chemical reactions.

Also, the liver produces substances that are crucial for sustaining life. The main function that the liver performs in the digestive system is the metabolism of fats, carbohydrates, and proteins.

Through oxidation (decomposition) of fatty acids, the liver supplies the body with energy. The duodenum secrets secretin which stimulates the liver. The liver manufactures bile which is crucial for the digestion of fats.

The detergent action of bile salts breaks the fat into tiny pieces so that it is easier for the digestive enzymes to work. Emulsification is the process of breaking up fats into tiny pieces.

The liver controls carbohydrate metabolism by maintaining normal blood glucose levels. When there is excess glucose in the blood the liver takes up the glucose and converts it into glycogen via glucogenesis.

The liver stores glucose as glycogen. When blood glucose levels begin to fall glycogen is converted back into glucose by a process called glycogenolysis. The glucose is transported to the tissues via the blood.

The liver degrades amino acids by the process of deamination. Deamination is the removal of an amine group via hydrolysis. Amino acids make up the protein.

The by-product of deamination is ammonia. The liver converts ammonia to urea. The urea leaves the liver, enters the circulation and travels to the kidneys for excretion.

Fact #10: The Gallbladder is an Accessory Organ of the Gastrointestinal System

When bile is produced by the liver it travels to the gallbladder for storage until needed. It travels via the hepatic duct.

The bile travels by way of the cystic duct through the common bile duct to the duodenum. Bile is a yellowish-brown or a yellowish-green fluid that contains acids, mucus, fluid, and pigment. Bile emulsifies fat so that it can be dispersed in water.

Fact #11: The Pancreas is an Endocrine and Exocrine Gland

The pancreas is located posterior (behind) the stomach. It extends from the duodenum to the spleen. The pancreas is an exocrine and an endocrine gland.

The endocrine function of the pancreas is to secrete the hormones insulin and glucagon. These hormones maintain glucose homeostasis.

The exocrine function of the pancreas is for gastrointestinal function.

The functional unit of the pancreas is the acinus. The acinus synthesizes, store, and secrete digestive enzymes.

The exocrine portion of the gland secrets buffers and digestive enzymes into the duodenum via the pancreatic ducts.

The main pancreatic duct is the duct of Wirsung. This duct joins the common bile duct and terminates in the duodenum at the ampulla of Vater.

The buffers secreted by the pancreas neutralizes the acidity of the chyme. This keeps the intestinal wall from damage. The duodenum releases cholecystokinin which activates the release of digestive enzymes from the pancreas.

The gastrointestinal system takes in, digests, absorbs and eliminates food for the purpose of supplying nutrients to the cells of the body. The digestive organs and the accessory organs accomplish these functions. These 11 Facts About the Gastrointestinal System will help with your understanding of this system.

Medical Terminology of the Gastrointestinal System