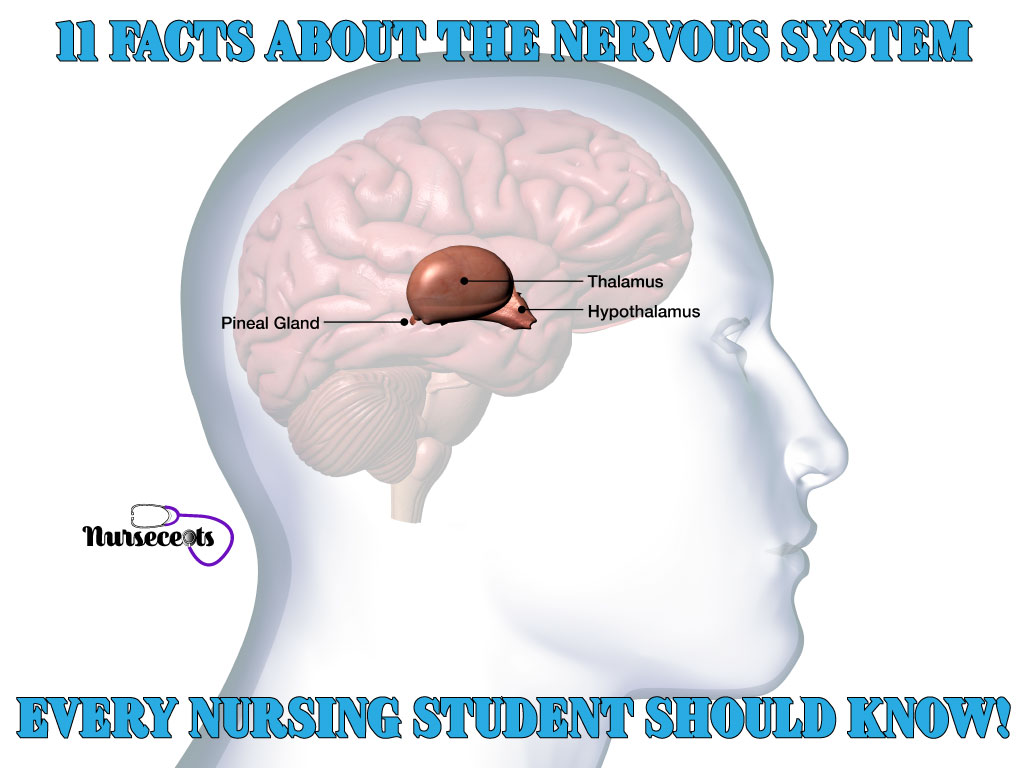 The endocrine system is one of two systems that coordinate the functions of the body. The other system is the nervous system. Read 11 Facts About the Nervous System Every Nursing Student Should Know.

The endocrine system is responsible for (1) the reproductive system, (2) growth and development, (3) homeostasis, (4) and metabolism. Hormones can also influence behavior. This article contains 10 Facts About the Endocrine System Every Nursing Student Should Know.

1. Hormones are the Chemical Messengers.

Hormones are chemical messengers. They are released into the bloodstream and travel to a distant target tissue and bind to receptor sites. Consequently, an alteration of the cellular environment or the regulation of the level of a hormone causes the release of hormones.

2. A Feedback System Regulates the Hormones of the Endocrine System.

A feedback system is a highly specialized mechanism that regulates hormone levels. Hence, the feedback is dependent upon the blood level of a particular substance. The substance can be a hormone or another chemical compound which is regulated by, or responsive to, a hormone.

Negative feedback is the most common type of feedback system. Accordingly, with negative feedback, the gland responds to the stimulus by increasing or decreasing the secretion of a hormone based on feedback from different factors.

An example of this would be the action of oxytocin during childbirth. An increase in uterine contractions due to pressure receptors in the vagina stimulates the release of oxytocin. Increase pressure on the vagina during childbirth signals the brain to release more oxytocin. This causes stronger uterine contractions. After birth and the pressure ends, oxytocin secretion decrease.

3. The Organs of the Endocrine System are Called Glands.

Consequently, these glands are where hormones are produced and secreted into the bloodstream. When hormones enter the bloodstream, they eventually affect a specific tissue called the target tissue.

4. The Hypothalamus and the Pituitary Gland are two of the Major Organs of the Endocrine System.

The hypothalamus is located in the diencephalon. This gland controls much of the body’s physiological functions including hunger, thirst, fluid balance, and body temperature.

The relationship between the hypothalamus and the pituitary gland is an important part of the endocrine system.

The hypothalamus secretes many different hormones.

Hormones of the Anterior Pituitary

These hormones are actually produced by the hypothalamus and stored by the posterior pituitary gland. So, the release of these hormones is under the control of the appropriate stimuli.

The major role of the antidiuretic hormone is the regulation of fluid volume in the body. The purpose of an antidiuretic is to decrease urination.

Therefore, when there is a decrease in urination there is an increase in fluid volume in the body.

Oxytocin causes an increase in uterine contractions. It also stimulates the ejection of milk from the mammary ducts. Oxytocin release is stimulated by receptors in the nipple of lactating women and by vaginal pressure.

5. The Thyroid Gland is Responsible for Many Metabolic Processes in the Endocrine System.

The thyroid gland is located in front of the trachea. It is a highly vascular organ and controls metabolic processes throughout the body.

The release of the thyroid-stimulating hormone (TSH) from the anterior pituitary gland regulates the thyroid gland.

Thyroxine (T4) is the most abundant thyroid hormone.

Triiodothyronine is more potent and has a greater metabolic effect.

The cells of the thyroid gland produce calcitonin in response to high circulating calcium levels.

When released calcitonin inhibits calcium reabsorption. It also increases renal secretion of calcium and phosphorus. Another role is the increased storage of calcium in the bone. These effects lower calcium levels.

The parathyroid glands are small and oval-shaped. They are located behind each of the thyroid lobes.

The actions of the parathyroid hormone are on the bone and the kidneys. It also acts indirectly on the gastrointestinal tract.

When the parathyroid hormone is secreted it increases serum calcium concentration and decreases serum phosphate levels.

The adrenal glands are small glands located on the upper portion of each kidney. Each gland consists of a medulla and a cortex.

The adrenal medulla is the inner part of the gland. Thus, the medulla secretes the catecholamines, epinephrine, norepinephrine, and dopamine.

Glucocorticoids regulate blood sugar. Cortisol is the most abundant and potent glucocorticoid. One major function of cortisol is the regulation of blood glucose concentration. It also has anti-inflammatory action. Also, cortisol helps maintain vascular integrity and fluid volume.

Mineralocorticoids are essential for the regulation of fluid and electrolyte balance. Aldosterone is a potent mineralocorticoid. It maintains extracellular fluid volume. Also, It acts at the renal tubule to promote renal reabsorption of sodium and excretion of potassium.

Adrenal Androgen stimulates sex drive, and also, pubic and axillary hair growth in females. Androgens are converted to estrogen in the peripheral tissue of females. However, there is a negligible effect of adrenal androgen in males.

7. The Pancreas has Both Exocrine and Endocrine Functions.

The pancreas is a lobular, soft gland. It is located behind the stomach. The pancreas has both exocrine and endocrine functions. The Islets of Langerhan is the hormone-secreting portion of the pancreas.

The pancreas is an accessory organ of the digestive system. Therefore, this part of the gland is the exocrine gland. It produces and secretes digestive enzymes that help to break down starches, fats, and proteins. In contrast, the part of the pancreas that acts as an endocrine organ produces hormones that regulate blood sugar.

There are four types of cells in the pancreas that secrete hormones. These include alpha, beta, delta, and F cells. However, only alpha and beta cells are discussed below.

Alpha cells synthesize and release the hormone glucagon. Consequently, glucagon is released in response to low blood glucose levels, the ingestion of protein, and exercise.

Beta cells produce and secrete insulin. Insulin is the principal regulator of metabolism. Moreover, Insulin facilitates the transport of glucose across cell membranes. The major stimulus for insulin synthesis and secretion is an increase in blood glucose levels.

8. Melatonin is Released by the Pineal Gland.

The pineal gland is located near the center of the brain. It is composed of cells that secrete melatonin. Consequently, exposure to darkness causes the release of melatonin.

Therefore, melatonin regulates the timing of the circadian rhythm and also has effects on the reproductive system. It also has an effect on immune regulation and the aging process.

9. Ovaries are the Reproductive Organ in Females.

The chief function of the ovaries in females is to produce and store eggs. In females, the ovaries produce estrogen.

Therefore, it is responsible for the development of the reproductive organ and secondary sex characteristics in females. The ovaries also produce progesterone. This helps regulate the menstrual cycle in females.

10. Testes are the Reproductive Organ in Males.

The chief function of the testes in males is to produce and store sperm. The testes also produce testosterone.

Therefore, the secretion of testosterone is responsible for the development of the reproductive organs and secondary sex characteristics and males.

The endocrine system consists of a series of organs and glands throughout the body that produce, store, and secrete special chemical messengers.

Moreover, the endocrine system is one of two systems that coordinate the functions of the body. The other system is the nervous system. so, don’t forget the check out 11 Facts About the Nervous System Every Nursing Student Should Know.

Also, read Spinal and Cranial Nerves. As a result, these three articles will help with your understanding of the control systems of the human body.

Medical Terminology of the Endocrine System